The sail from Darwin to Dili took 4 days, with great winds and calm seas.  It was so good to be back on the water with our spinnaker up and flying along at about 7-8 knots.  We headed north and rounded Jaco Island which was where the wind died and we dropped to 1 kt – really frustrating as we could see and smell East Timor on our port side.  It looked so beautiful – our first foreign port.   We eventually arrived and dropped our anchor by 4pm.  We were cleared in and drink in hand at Gino’s bar by 5.30pm.  Easy…

Up early with a sore head and straight into a mini bus for a tour.  East Timor is clean and safe, but outside of Dili the poverty is evident.   Little thatched huts and people everywhere.   There is a construction program which is hopefully going to improve their infrastructure but it looks like a long process.  We had lunch at a gorgeous little bar and had a swim while the dolphins played in the bay.  This is what I signed up for…

We finished the day going to see the Statue of Christ which dominates the skyline of Dili – think Rio.   It was quite a hike but worth the view.   We hadn’t walked for so long that our muscles ached all evening!

Next day we went on a tour of Dili itself.  East Timor has been through some terrible times since they became independent in 1999.   They were under Portugese rule from the 16th century until 1975 when after a nine day independence they were occupied by Indonesia.   They were under Indonesian rule for 24 years and during this time, they suffered terrible losses and were cut off from the world.     A young man called Sebastian Gomes was murdered by the Indonesians in 1991, and at his funeral many timorese gathered to protest at Indonesian rule.  A young Australian reporter was at the protest and captured on film the carnage of the troops gunning down these protesters.  This footage was smuggled out and the world started to realise what was happening. It was the beginning of the end and full independence came in 1999.

We went to the markets and were amazed that they didn’t take everything in at night.  Just covered them up, went home and came back the next day.  No theft… incredible.

The next day was the presentation for the rally.  It was held on the foreshore and attended by many dignitaries from the Timorese government and rally organisers.  It was a full-on affair with dancers, singers and speeches.  Somehow we came 2nd which we were really chuffed with. 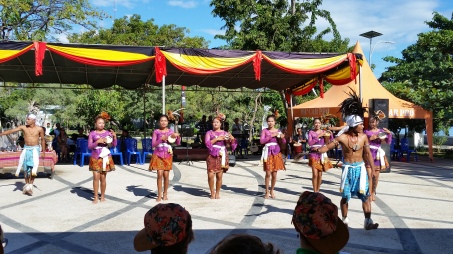 That evening there was a rally dinner.  It was such a great day – we ended up at a club dancing the night away and headed home late.

One thought on “Dili – East Timor”