Dar es Salaam has been a fabulous spot to stay for a while. We are staying in Slipway which is next door to the Dar Yacht Club as it has everything a cruiser wants.  It has good security with at least three guys on the security gate at the end of the jetty and no-one has access to the water without getting past them.  It has many restaurants, bars and coffee shops in the precinct, and many souvenir shops to satisfy the tourist in me.  There is a hairdresser, supermarket, travel agent, spa, and a bookshop.  Many a day has been spent just in Slipway using their fee wifi, drinking coffee and watching the world go by.  For Ian there is an even bigger treat – there is a small boatyard run by a great guy called Jason who has been here for over 10 years and knows all there is to know about where to source things.  They charge about $A50 a month and that includes a free dinghy service from 6am to 10pm to and from your boat.  That saves us petrol and paying a boat boy to look after our dinghy while we are ashore so it is really good value.

We wanted to see more of the treats of Tanzania and the most famous of these is Zanzibar Island just 40 miles north.  This place evokes romantic and exotic images and we were not disappointed.

Zanzibar – also known as Unguja is such a gorgeous place.  It is an old trading centre and Stonetown is a labyrinth of winding alleyways and old stone buildings.  Being a Muslim Island there are mosques everywhere and the call to prayer woke us every morning at dawn – reminiscent of our days in Malaysia.   Tanzania was called Tanganyika until 1961 when it gained independence and the name Tanzania is a mixture of the two states Tanganyika and Zanzibar – creating the present name of Tanzania.  Zanzibar still protect their independence and like cruisers to check in when they arrive even though they have checked into Tanzania – but in reality no-one ever does and we were not approached by customs during our visit.  A new marina has just been completed here and we stayed for one night here.  It was expensive at $A70 a night so we used their water to wash the boat, do at least three loads of washing and fill our tanks.  It is attached to a very flash hotel – Hotel Verde which was very beautiful but completely dry – no alcohol with our dinner here…  The marina was only a few kms from Stonetown but they wanted about $20 for a taxi so we then headed down to the harbour area and anchored just opposite Stonetown.

Stonetown is just beautiful.  It is full of winding lanes that we got hopelessly lost in – and google earth was no help as the signal kept dropping out.  We had to rely on the locals to find some places we wanted to see.  There is a very good Slave museum here which recounts the terrible events of the slave markets here.  Zanzibar was one of the largest slave ports in the world, which was dominated by Arab slave traders.  They were taken by force from all over East Africa, brought to Zanzibar often carrying Ivory, held in below ground cells and then traded in the markets.  This horrible dark history is documented on the walls as you walk through  the museum and you end up down in the cells where they were held and even the chains that were bolted to the concrete still remain.  It ends with the horrendous details of slaving today which is a actually far bigger now than it was then with sexual slavery being the most common type of slavery.  It was very confronting and a stark reminder of how lucky we are to be free.

On a lighter note Zanzibar is delightful.  It is clean, safe and very different from most of Tanzania.  We visited the traditional markets which were better then anything we had found in Dar es Salaam and had a few sundowners watching the dhows come in from their fishing.

We wanted to see the house where Freddie Mercury was raised,  but unfortunately there is nothing there but a plaque – no museum or other information.  Oh well – a pity they don’t have more details on their most famous son.

Zanzibar has another claim to fame – their doors.   They are all highly decorative and intricately carved.  Most are well cared for but some are crumbling away. 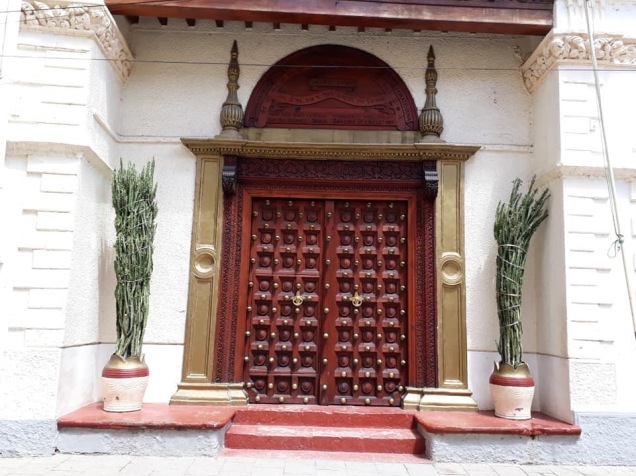 Another place we sailed to was Mafia. We wanted to swim with the whalesharks here as they come through every year for a few months to feed on the huge amounts of algae that are here.  We had swum with a whaleshark when we were in the Anambas islands and it was so thrilling that we didn’t want to miss the opportunity again.  Whalesharks are the largest fish in the ocean but are completely harmless – they are so majestic but unfortunately they are threatened so the more tourists that want to see them, the more money the locals will make and hopefully the better protected they will be.  The capital of Mafia is Kilindoni and they have a statue of a whaleshark in their town which indicates they are very proud of them.  We met up with our friends Lesley and Phil from Paseafique here to spend a few days here . We spent the first day out in the bay and saw a few whalesharks but as soon as we got near them, the local boats with a couple of tourists would speed over with their outboard motor on full throttle, and the tourists would jump into the water really close to the whaleshark.  Result:  the whaleshark would dive immediately and nobody would get more than a couple of seconds with them.  This went on all day and we resigned ours to the fact that we may only get to see them rather than swim with them.

The next day we left early to try again.  The same thing happened with the local boats so we just dropped anchor and had lunch.  After lunch Ian went up to the helm and saw a whaleshark just resting beside the boat – completely at ease with the huge bulk of our catamaran beside her.  We gently all slipped into the water and had about half an hour swimming with her.  She stayed beside the boat the whole time but we had to swim hard to fight the current. It was magical – she was not frightened at all and we were so thrilled to get the opportunity to spend such a long time with her.

Mafia is not at all touristy, and the locals seem to have little interest in us.  They have a fish market in the beach every day and the hotels seem very quiet.  There is little to do except the whalesharks so we only spent a few days here.

On the way back to Dar we called into a small private island. The marine and parks officers came out and told us we could stay for one night and then about an hour later came back and said we had to leave.  By then it was getting late so we managed to persuade them that we would be gone first thing and they left.  As there were no guests staying, we were able to spend a wonderful night pretending we were part of the super-rich enjoying the $25,000 a night island with the guys who worked there.  They were as interested in our story as we were in theirs.  We did leave at the crack of dawn the next day and got back to Dar by late afternoon.

We have been lucky enough to have the opportunity of taking guests out on Indian Summer while we have been in Dar.  There are a couple of islands off the coast, Bongoyo and Mbudya and also a small sand spit that is only accessible for a short time each day.  We spend most weekends at these islands enjoying the company and relaxing over a few drinks.

4 thoughts on “The Treats of Tanzania”