Albania lies only a few short miles from Corfu which surprised me as I had grown up with Albania being a completely closed country where people got locked up if they ventured into her boundaries.  Having spent 3 months soaking up the beauty of the Greek islands I was very surprised to sail into Albania and see a wall of concrete tenement blocks with thousands of  beach umbrellas on the beach. Welcome to Sarande – the tourist capital of Albania…. not the old unexplored Europe I was expecting but first impressions can be deceiving.

I had arranged to meet our agent on arrival and so we took the dinghy to the port and met the delightful Jelja from Sarande Summer Tours who cleared us into the country in record time.  We were then free to explore…

Now we always try to keep an open mind but this time we found it hard … this seaside town was just surviving on the Albanian tourist dollar. Bars and restaurants selling pizza, pasta and hamburgers and hundreds of deckchairs on a pebbley beach.  In the streets behind the sea front we found many shops boarded up and the rubbish bins were overflowing. Where was the idyllic Albania we had heard about with it’s cobbled streets, ancient villages and old fashioned way of life?

The next day we hired a car and set off to explore inland. We wanted to see The Blue Eye which we had been told was a ‘must see’ – a spring which glistened blue. It was indeed pretty but really cold! We filled our water bottles from the spring and had a coffee there. Onward to the next destination we had been told not to miss – Gjirokaster. A hilltop village with winding stone streets and views to die for.

This village literally consisted of two tiny restaurants, a couple of tiny shops and a few streets but it was gorgeous. We had the best meal in one of the restaurants where menus were non existent – pointing to what you wanted in the kitchen was how you ordered your meal – all made by hand by the delightful  owners.  The meal was the best we had eaten for weeks and was less than $A10 each with wine included  – with our faith in Albania restored we set off to explore some more.

We visited another town which again was very run down with most of the shops boarded up. Stopped and had the cheapest drink in Albania- A$1 A beer and slowly made our way back. Saw lots of ruins including the old 5th century Synagogue right in the centre of Sarande.

In every port in Albania boats must check in and out of using an agent, so after checking out we headed north to the port town of Durres to re-check in again with another agent.  It equates to a similar cost of the cruising tax in Greece so we didn’t mind – and arrived via an overnight stop in a small anchorage on the way early in the evening.

Just before we dropped anchor I got an email from a guy who said he had seen our sail coming in, he was a newly arrived American expat and would we like to catch up…  I emailed back and asked him how he had got our email address and he said it was on our blog website!!  We were amazed at his ingenuity and arranged to see him after we had finalised our paperwork.

Durres was completely different from Sarande.  We moored stern to alongside the quay in the harbour itself, which was very safe as there was security and port police around. We were in the heart of the town which is really clean, modern and vibrant. That evening we met up with Scott and his wife Ashley and their three young daughters

The story was that he enjoyed watching the boats coming in and out of the harbour and he had checked on one of the shipping websites to see our name and flag, gone into our blog , found the contact page where I had said all enquiries welcome and so he contacted us!! Their story was just as exciting – Ashley is a teacher and they have lived in  China, Russia and UAE before coming to Albania. We went to the Monument for a drink which is a Venetian 5th century tower 9 metres tall which has a rooftop bar.  To get up to the top you go up the steepest flight of stone steps and through a little tunnel where you get magnificent views. It was such a cool place and yes – this was the Albania we had envisioned and now we were slowly starting to fall in love with Durres.

We then went out for a meal along the seafront which was unbelievably busy. Traditionally all Albanians go walking in the evening and so the streets were packed with families enjoying the warm weather. We had decided to spend a couple of weeks in Durres so we organised a dentist for Ian which would need a week or so and I booked with a rheumatologist in Tirana. We hired a car and set off for the capital which was only 40km away.  Tirana was fascinating –

Here are some facts about Albania

2. There are more coffee shops, bars and restaurants per head of capita than anywhere else in the world. 647 to every 100,000 people. London has 32!

3. 28% of their private business is cafes and bars

5. They were the only country that was officially  Athiest during Hoxha’s regime and religion was banned in 1967.  Anyone caught breaking the law was  jailed for 3-10 years.

6. Only capital city without a Macdonalds

7. Three times as many Albanians live outside the borders with only 3,000.000 actually living in Albania.

Tirana itself was full of coffee shops and we found ourselves outside the parliament  building with all these reporters. Some politician came out and I somehow got in amongst crowd and started taking photos- Ian said it was hilarious that I suddenly became part of the pack of reporters with their huge cameras and microphones and all I was using was my trusty Samsung.

During Hoxha’s regime between 1945 and 1985 Albania was completely closed to everybody and paranoia became the norm. Hoxha ordered that bunkers were constructed everywhere for defence and there are still thousands of them still left

All along the coast sailing up we saw them and even in the city parks there were bunkers The paranoia didn’t end there though. He had a massive bunker built to house himself and his Generals and their families if they were invaded and we spent an amazing couple of hours going round this Bunker. 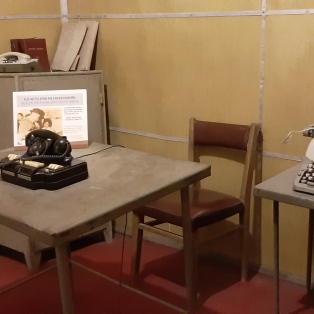 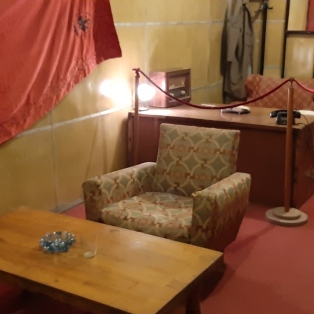 Some of the rooms were furnished as they would have been if there was a  invasion. The rest of the rooms displayed items that related to the history of Albania since 1935 and showed the rise of Hoxha and his party. Interesting stuff but we were glad to see daylight again.

We also went up on the cable car but it had clouded over so visibility was really poor.

Ian had a filling, a root canal, and a crown all for the grand sum of A$230. I saw a rheumatologist, had more bloods taken, and got my drugs – total A$110.  Medical tourism is booming here.

We spent the next few days enjoying Durres and caught up again with Scott and Ashley and the girls at a very flash bar called The Fly Bar which was on the top floor of a skyrise building.  The views were magnificent and so were the cost of the drinks, the most expensive so far!  We have found that Albania is quite a cheap country to visit with the exception of the diesel at A$2.50.

Ashley worked at the International school and invited us to visit, so we took up her offer and were really glad we did.  The building is amazing and we were told brides have their photos taken outside it.

The inside of the college  the indoor playground

Durres was surprisingly modern and spacious. Many of the pavements were made of marble and there were lots of beautiful buildings. In the centre there is a well preserved amphitheatre and everywhere you walk you find ruins of some kind. We loved walking around the City just exploring the tiny side streets and finding many small coffee shops and bars.

The market was huge and we saw a lady selling leaches… we had never seen leaches sold before.

After a couple of months with us, Mike had go and visit his son in the UK so we had a final meal at the fabulous Mema House which was our favourite restaurant – mainly because it sold traditional Albanian  food which is delicious.  One of their best local dishes is lamb baked in a crock pot with a yoghurt and cheese sauce – voted no 1 meal by all three of us.

The next day we said our au revoiurs to Mike and set sail for Montenegro.

3 thoughts on “Albania – a lovely surprise…” 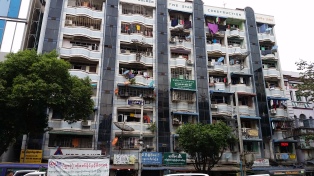 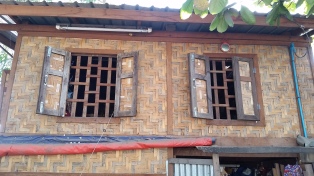