After our overnight sail to Pangkor we anchored just outside the marina and just chilled out for the day.  We wanted to organise fuel, laundry etc and have a lazy day as all cruisers do on arrival at a new port.

One of the stops on this leg of the rally was a day trip to a place called Ipoh.  I had never heard of Ipoh and was I in for a surprise.  Ipoh is the capital city of the state of Perak and was once a very large tin mining town.   It is one of the largest cities in Malaysia and lost out to Kuala Lumpur as the capital.  Its real estate is far cheaper than KL so many people commute from Ipoh which makes it a good option for younger people to live.

We were dropped off at the Rail Station (pic above) which was a lovely old colonial building, but it was deserted – we gather it was a working station though.  We wandered around aimlessly for about an hour and then the bus picked us up again and we were take to the old part of the city – WOW what a gorgeous place.   It has retained its charm and all the artists have decorated it with the most amazing murals.   Everywhere you went, through the little lanes, you discovered another piece of art.  The atmosphere was great, and I could have spent few days exploring. 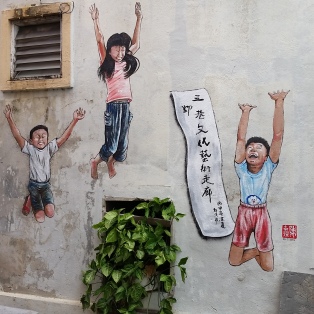 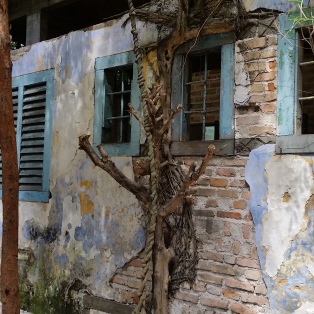 The delightful lanes of Ipoh

I love this window and the overhanging vine

The lanes with their shabby chic look – and I love this window with the overhanging vine.

The glass bottles are fish bowls and the tiger has his paws resting on the table.

We spent hours exploring – but unfortunately did not get to see half of it.   It was a photographers dream – a place I will definitely come back to.

After lunch we visited some caves – continuing on the art theme, all the way up the steps before we entered the caves were small tablets all depicting a different scene.  They were mostly made of clay and some were offerings. 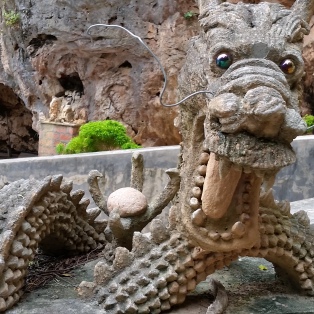 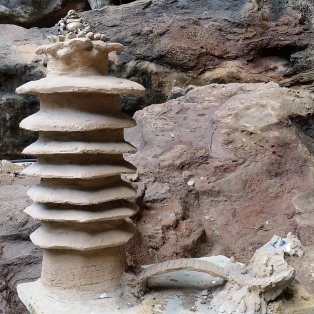 The cave was a walk-through cave very well lit and ended up at a lake covered in water lillies.

We headed back to Pangkor and had a few drinks at the bar – lucky it wasn’t a Monday.

The next day we went on a tour of the small island of Pangkor just opposite where we were anchored.  We visited a Chinese temple which had a small replica of ‘The Great Wall of China’ around it.

We also visited a boatbuilding yard – which all the guys loved.

We ended up having lunch at a beach restaurant and were treated to a 7 course meal! A long walk down the beach later to walk off some of the food and then headed back to the boat.

The next night was the gala dinner put on by the Pangkor marina.   Another great night, great food and a great band. 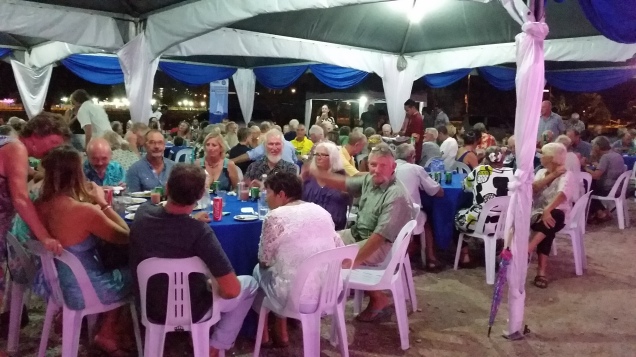 We had a couple of days to sail to Penang, so we decided to stop over the night at the little bay we had spent such a lovely afternoon at a couple of days before.   We had a beach party on the little island in the bay but it was a very rolly night so we didn’t get much sleep.

We headed off early the next day to spend our second night en route at a small island 15nm nearer to Penang.   An uneventful night, early dinner and a movie as we wanted to leave at stupid o’clock to arrive in Penang early in the afternoon.  We set the alarm for 4am and in the pitch black I started pulling up the anchor.  It was making a really weird noise like a grinding sound, and to our horror when we checked, we were pulling up a rogue anchor from some fishing boat (we think). How our anchor  winch managed the weight we don’t know, but we were stuck fast.  Our chain was wrapped around this anchor at least three times and the flutes were preventing us from unwrapping her.  We tied some rope onto it, to release the weight from our anchor winch, and three hours later we were able to drop her and pull ourselves free.   With relief we set off to Penang.   Surely nothing else could happen on this section of our journey?