We sailed back to the mainland and called into a few places on the way up the coast.   One of these was a small island called  Ko Phra Thong.   We saw a resort to the right and could see a couple of beach shacks on the beach so we thought we would just drop anchor, walk down the beach and see if we could grab something to eat.   Once we got to the beach we realised that this place was bigger than we thought – there were beach bungalows set back, beach bars and loungers but no people.   We found a wooden walkway with a small restaurant at the top, where we had an early dinner.  There were a couple of locals here but not a tourist in sight.

We then wandered down the beach and around the top of the bay and found an enormous beach – the tide was out but the actual beach was one of the largest we have seen so far in Thailand.   It was also completely deserted!

We walked along the beach and cut through to find many little beach bungalows, beach bars and furniture.  We even found a whole resort completely empty but in good nick so it was not abandoned.  It seemed sad that such a lovely place was not being enjoyed.

We moved on the next day and went to another island called Koh Phayam.  This is a delightful island with no major big resort complexes.   It still has the feel of the old Thailand I remember when I came here 33 years ago. Lots of beach bungalows, colour, wood and bamboo structures and no cars.  We dropped anchor in another deserted bay and hired a motor bike to go exploring.

We visited the pier where most people (except cruisers!) arrive and then had lunch in a small beach bar.  We couldn’t go round the island as the roads don’t so we zig-zagged our way around instead.   Koh Phayam has a big cashew nut industry but we couldn’t find any roasted cashews – only raw ones.  They are everywhere, drying out in the sun.  Did you know the cashew nut is just the small growth underneath a cashew apple.  This cashew apple is not used commerically but the cashew nut is harvested. 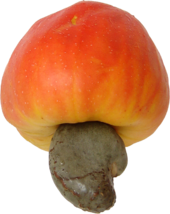 It only took a few hours to visit most of the island – a lot of it was quiet because of the time of year but we saw more tourists,mainly backpackers here than anywhere up this part of the coast.  It’s a beautiful island, very lush and without cars, a very safe place to see on motor bike.

We went back to Indian Summer and decided to have a drink in the Hippy Bar.  This place is well known amongst cruisers – it is an amazing bar.  Made entirely out of wood, it is many little seating areas rather than just one.  It is literally on the beach.

We had a drink here, spoilt for choice as to where to sit – we eventually chose a platform overlooking for the beach.

The view wasn’t bad from the other side of the table either….

We could have stayed here longer but we also wanted to head onto Ranong – the border town with Myanmar.  No reason – just thought a town would be different….   We found the entry difficult – the pilot charts tell you to anchor at one end of the town where the major port is, but the town is too far away to dinghy so we eventually dropped hook about a mile from where all the local boats moor and just dinghied in.  We were impressed with Ranong.  It is a working town with very few tourists except those who want to go to Myanmar by boat and people doing a visa run.   To access the streets you have to walk through passport control – which was going to be a big difficult as we didn’t have our passports on us  So with heads held high we just sauntered through and no-one stopped us or questioned us.  Wonder if it’s like that on the other side in Myanmar! We had already passed a small customs building on the way in – so maybe they check passports there..

We headed into the markets which were enormous – they sold everything you could think of – I love these markets – they are really old and haven’t really changed.  We then got a motor bike with a side car and went up to the hot springs.  There were about four or five of them and you could feel the heat coming off them.  We wandered around here for about an hour and then headed back to Ranong.

Between Ranong and Myanmar is a very small island which belongs to Thailand.   There is a Buddha on this island and all the longtails that leave Thailand to go across this stretch of water, stop here to pay their respects.

We needed to head back to Phuket before the weather got too bad, so after a couple of days we set off.  For the first time in weeks, we had some decent wind and on a beam reach we flew down the coast hitting 9 knots at times.  It felt so good to be really sailing again as nearly all travel here is motor-sailing.   Coming from Western Australia where 25 knots is commonplace, we find it really frustrating to have only 3-4 knots of breeze and this sail was a really great sail!  We called into the night-life capital of Phuket – Patong on the way down.  Glitz, noise, colour, neon – Patong has it all.   Hundreds of bars and hawkers, 24 hours a day.  So different from what we are used to.   We went for an early dinner – which was surprisingly cheap considering we were in Patong.  You could eat anything here – Mexican, French, Japanese, Nepalise etc   … we had a pizza

After an interesting evening in Patong, we had to get back to Indian Summer and have an early start to get back to Chalong.  When we went to leave the next morning, it was bucketing with rain and visibility was down to about 15 metres.  We left not long after the squall, and had lovely sunny weather all the way down and arrived in Chalong in the early afternoon.   We met up with Michelle and Phillippe (Tereva) who had just come back from Myanmar – and went into town for drinks and dinner. 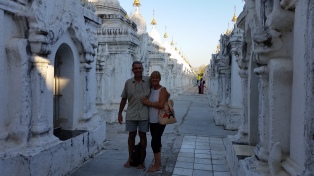 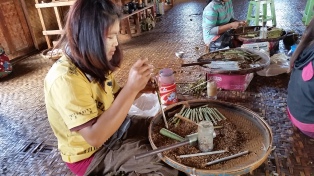