Having spent longer in Chalong Bay than we had intended, we decided to sail up the West Coast visiting the quieter side of Phuket, the Marine Park islands of the Similans and the Surins and head up to the border town of Ranong.   We had heard good reports of this area of Thailand, and we needed to get there before they closed the islands in mid May before the arrival of the South-west monsoon.

We had to stop on the way up to fix the gear change cable – another jury rig until we can get another one but it was lovely to be alone in a deserted bay  for a couple of days.  We made our way to Ban Thap Lamu which is a naval base and went ashore for a lovely dinner at the Navy Club. We just wandered around the town picking up a few provisions and then headed back to the boat for an early start to the Similans.

There are 9 Similan islands –  the name Similan is derived from the Malay word sembilan meaning nine.  Although each island has a name they are literally know as No.9 or No.5 etc.  We wanted to come here and snorkel as these islands are said to be world class.  We arrived about 4pm and saw many fast speed boats leaving as we approached.  We anchored in a gorgeous little bay which we shared with another 2 dive boats.  We jumped into the crystal clear water for a snorkel and we were not disappointed.   Later that evening we watched in amusement as the divers from our neighbouring boat all swam under Indian Summer to check out the coral – we should have given them a scrubbing brush!  The next morning we headed round to the other side and grabbed a mooring before all the day trippers arrived – and boy did they arrive….  We counted over 45 fast boats each with at least 20 people on board.  There were also the dive boats with about 25 people on board – but we lost count of them.   They were mostly Chinese, a few Europeans and Thai nationals and Ian reckons there were over 1000 visitors to the bay.  This is not high season, in fact it is the tail end of the season so imagine how crowded it gets during Jan & Feb.  We went ashore and climbed up to the highest part of the island and the view was magnificent.  With so many people on the beach we headed back to the boat to wait for the quieter time and found that we were acting as a mooring boy for some local boats.  We were impressed with their boat handling skills, they didn’t touch us at all and were very polite.

By 4 o’clock all the boats had departed…  We had the place to ourselves.  We spent the rest of the day in the water, and were really impressed by the fish life.  Because it is a marine park, there will be no development here, the fishlife will be protected which is encouraging to see as so much of South East Asia now has a depletion in fish stocks.  Tourists come and go within the day and they have to take all their rubbish with them.   The next morning we went up to another island and managed to get a mooring before all the fast boats. 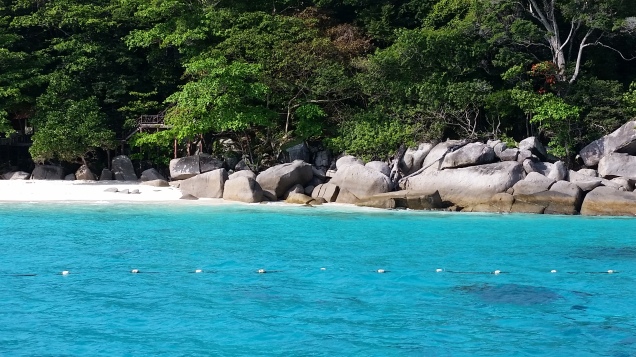 The colours are really that vivid and the sand is really that white.   A photographers dream…  The rope across the water is for the fast boats to tie up to so that all their snorkelers can jump straight in.  The Similan beaches all have these huge granite boulders, both on land and underwater which give the fish many places to hide.  We didn’t dive here but with the clarity of the water and the fish being so close to shore, the snorkeling was really good.   We spent a lazy couple of days relaxing, swimming and walking. We also climbed up to the highest part of this island, clambering over rocks and over rickety wooden steps – to look over the island.   Again it was well worth the trek – although this climb was not as arduous as the last island which was evident in the amount of people at the top.  Masses of Chinese tourists all taking selfies with the ocean in the background and giving the victory salute.

The next group of islands we wanted to visit was the Surins, about 50 miles away.  We thought they would be very like the Similans but they were very different.  Again we arrived early in the evening, grabbed a mooring and went for a wander along the beach. Instead of huge granite boulders on the beaches, it was more mangroves.   There is a community of people who live here called Moken.  They are a small community of only 150 people, and interestingly they lost no-one during the tsunami as they recognised the signs and all climbed up to higher places.

We spent a fabulous couple of days here – there is a small restaurant on another island and some basic accommodation but we did not see the huge amount of visitors here that we saw in the Similans and so it seemed quieter.  We snorkeled a lot but the fish life was not so prolific.  The corals were lovely though.

These islands are well worth a visit as they are completely untouched by development.  My fondest memories of Thailand will be watching the sunset with a glass in hand somewhere in these islands I think.